Marriage in the Catechism of the Catholic Church

For most people marriage is one of the most important decisions and realities of their life; in it they form a community of love. For Catholics, marriage is not merely a civil contract but is a covenant between a man and a woman before God. If both are baptized, the marriage is a sacrament, a symbol of the unity of Christ and the Church. A sacramental marriage is a means of grace, giving strength to the husband and wife to live out their commitment, and to help each on the path to holiness.

As you prepare for marriage, you’ll be asked to reflect carefully and prayerfully on the nature of this sacrament. Before we look at some of the steps of that preparation process, consider some of the points made in the Catechism of the Catholic Church (references* are to paragraph number):

*1660 The marriage covenant, by which a man and a woman form with each other an intimate communion of life and love, has been founded and endowed with its own special laws by the Creator. By its very nature it is ordered to the good of the couple, as well as to the generation and education of children. Christ the Lord raised marriage between the baptized to the dignity of a sacrament…

1661 The sacrament of Matrimony signifies the union of Christ and the Church. It gives spouses the grace to love each other with the love with which Christ has loved his Church; the grace of the sacrament thus perfects the human love of the spouses, strengthens their indissoluble unity, and sanctifies them on the way to eternal life. 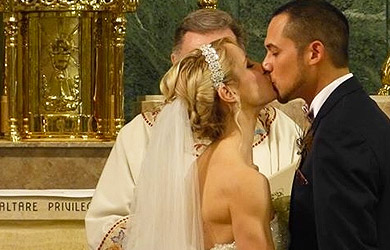 1662 Marriage is based on the consent of the contracting parties, that is, on their will to give themselves, each to the other, mutually and definitively, in order to live a covenant of faithful and fruitful love.

Any marriage involving a Catholic is subject to Church norms known as “canon law.” Catholics are obliged to marry in the Catholic Church, following the marriage rite of the Catholic Church. Their exchange of vows must be witnessed by either a priest or deacon and two other witnesses. A Catholic can receive permission to marry a non-Catholic and they may be married in the church of the non-Catholic party, but if their exchange of vows will be witnessed by a minister of that denomination, the Catholic must seek a written dispensation from the local Catholic Bishop. Any priest or deacon in one of our local parishes can assist in this matter.