Home → The Catholic Faith → The Church is Catholic

The Church is Catholic 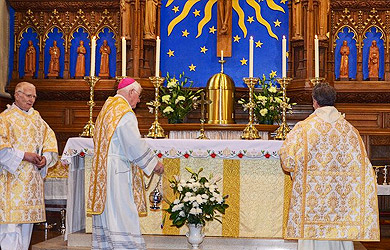 If you were to go to Sunday Mass anywhere in the world, you’d hear the same Scripture readings being proclaimed (albeit in the local language).

This is a universal practice of the Catholic faith.

But more than just commonalities in Scripture readings, the Catholic idea of “universal” has a much deeper meaning that simple global coordination of liturgical readings.

Universal in terms of Catholicism means “according to the totality” (CCC 830).  Simply put, everything in the world is affected totally and completely by the Catholic Church.

To this point, it is hard to imagine an area of the world – hospitals, educational institutions, governments, families, businesses, social programs – that hasn’t been or currently isn’t affected in some way by the Catholic Church.  This is because all these areas are rooted in various teachings of the Church and lead in various ways by members of the Body of Christ.

Lumen Gentium states that, “The character of universality which adorns the People of God is a gift from the Lord himself whereby the Catholic Church ceaselessly and efficaciously seeks for the return of all humanity and all its goods, under Christ the Head in the unity of his Spirit.”