The Rosary, though clearly Marian in character, is at heart a Christocentric prayer. In the sobriety of its elements, it has all the depth of the Gospel message in its entirety, of which it can be said to be a compendium. It is an echo of the prayer of Mary, her perennial Magnificat for the work of the redemptive Incarnation which began in her virginal womb. With the Rosary, the Christian people sits at the school of Mary and is led to contemplate the beauty on the face of Christ and to experience the depths of his love. Through the Rosary the faithful receive abundant grace, as though from the very hands of the Mother of the Redeemer.
—From On the Most Holy Rosary. . . (Rosarium Virginis Mariae)

The Rosary is a Scripture-based prayer. It begins with the Apostles’ Creed, which summarizes the great mysteries of the Catholic faith. The Our Father, which introduces each mystery, is from the Gospels. The first part of the Hail Mary is the angel’s words announcing Christ’s birth and Elizabeth’s greeting to Mary. St. Pius V officially added the second part of the Hail Mary. The Mysteries of the Rosary center on the events of Christ’s life. There are four sets of Mysteries: Joyful, Sorrowful, Glorious and––added by Pope John Paul II in 2002––the Luminous.

The repetition in the Rosary is meant to lead one into restful and contemplative prayer related to each Mystery. The gentle repetition of the words helps us to enter into the silence of our hearts, where Christ’s spirit dwells. The Rosary can be said privately or with a group. 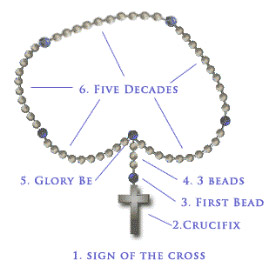 The Five Joyful Mysteries are traditionally prayed on the Mondays, Saturdays, and Sundays of Advent:

The Five Sorrowful Mysteries are traditionally prayed on the Tuesday, Friday, and Sundays of Lent:

The Five Glorious Mysteries are traditionally prayed on the Wednesday and Sundays outside of Lent and Advent:

The Five Luminous Mysteries are traditionally prayed on Thursdays: 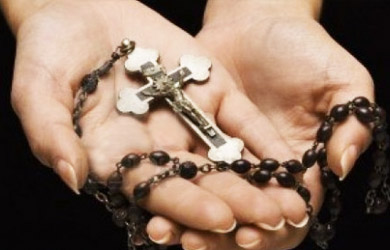 Familiarize yourself and/or your group with the prayers of the rosary.