Home → Virtual Vs Real: The Dilemma of a Pandemic Stricken World

Virtual Vs Real: The Dilemma of a Pandemic Stricken World 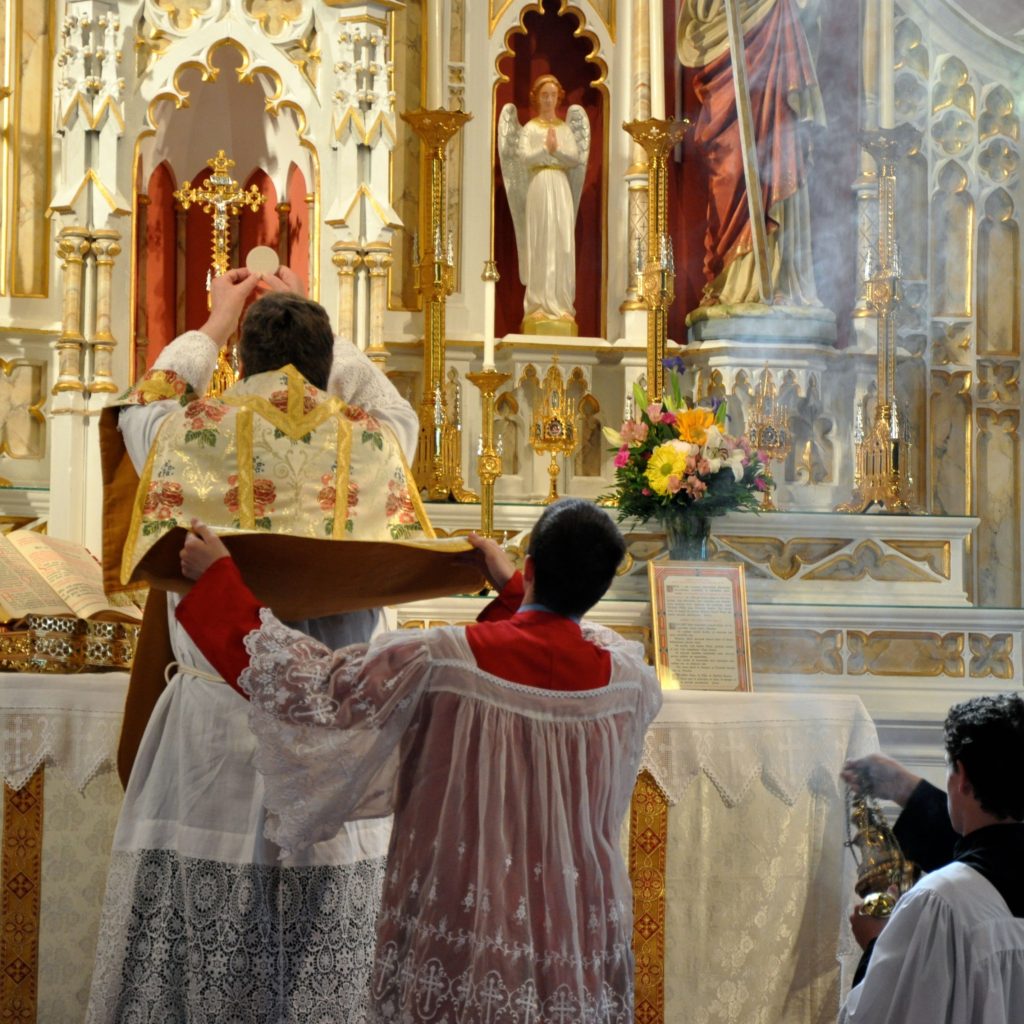 “Eucharistia facit ecclesiam, ecclesia facit eucharistiam” (The Eucharist makes the Church and the Church makes the Eucharist). The life of the Church cannot be envisaged from a single aspect. Yet, if one examines the different manifestations of her life, such as, worship, theology, spirituality, etc., one finds that there is always a central element, a point of departure, which also is a point of arrival, a centre that is the cause of her existence, namely, the Eucharist. The Eucharist is not just one of the seven sacraments, but it is ‘the sacrament’, the source and summit of our Catholic faith and Christian Life. The word ‘Eucharist’ comes from the Greek ‘eucharistia’ meaning ‘thanksgiving’. The Catechism of the Catholic Church teaches, “The Eucharist is a sacrifice of thanksgiving to the Father, a blessing by which the Church expresses her gratitude to God for all his benefits, for all that he has accomplished through creation, redemption and sanctification” (CCC 1360). 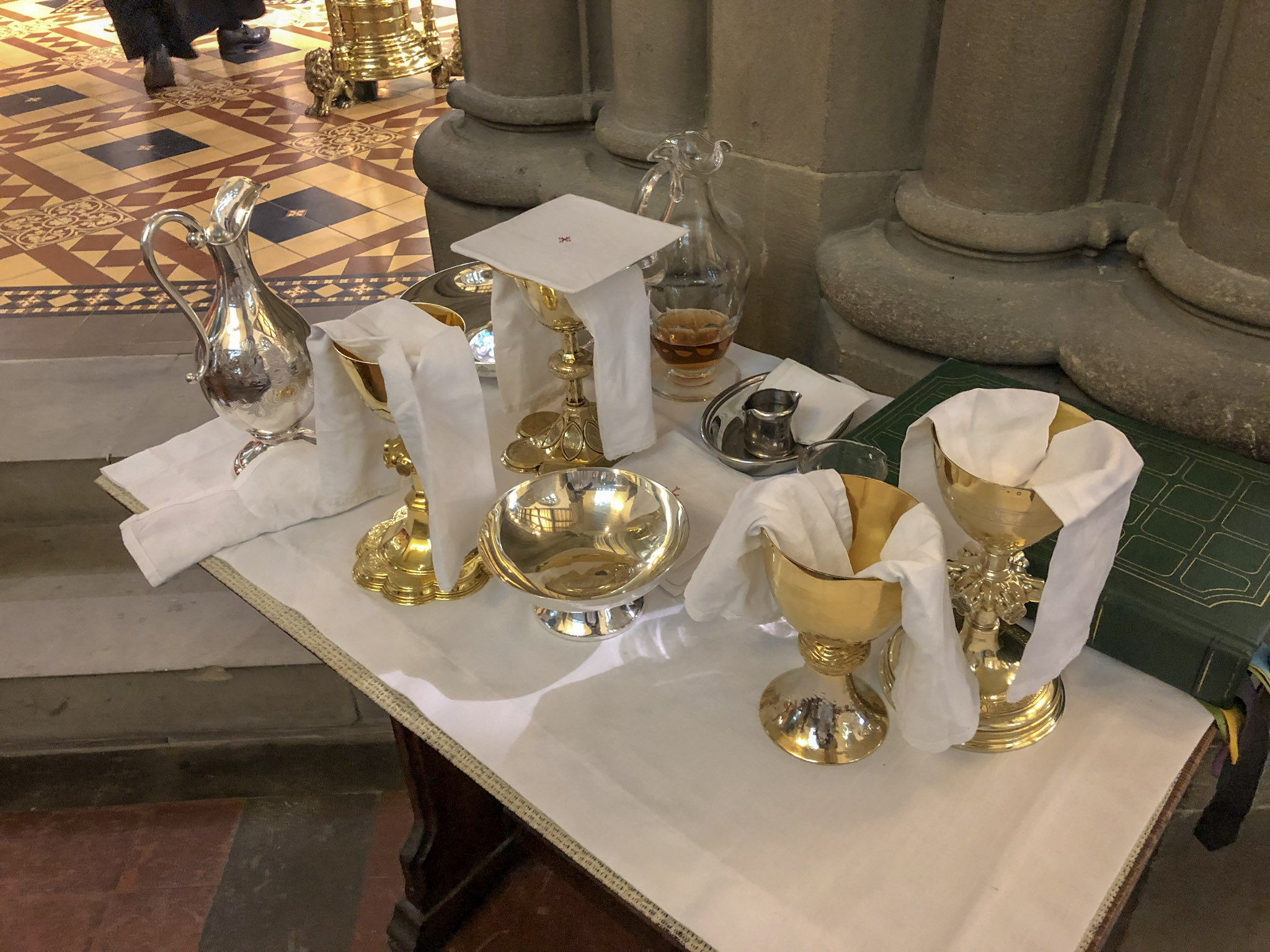 A sacrament is a sign whose presence or manifestation indicates the probable presence or manifestation of something else. The sacraments are the crown of the Catholic Faith, and the Eucharist is the crown of the sacraments. As a sacrament, the Eucharist is an efficacious sign of the sacrifice offered by Christ on the Cross. What makes the Eucharist unique is the real presence of Christ under the appearance of bread and wine. It is the sacrament that in the most perfect way makes present and models the Church. The Church in her deepest sense could be described as ‘the sacrament of the risen Christ’ because she makes the risen Christ present in this world through what she is and through her members, the faithful. Saint Ignatius of Antioch called the Eucharist the ‘mystery’ of Christ’s body and blood. He considered it as ‘the medicine of immortality and the antidote against death’ , ‘the spiritual food which strengthens the one who receives it and helps him into eternal life.’ As sacrament and worship, essence and expression of the Church, communion and sharing, the eucharist has over the centuries exerted a powerful refining and educational influence, by making men and women, a ‘new creature’, a living eucharist.

Many experiences such as births, deaths, weddings, and even momentary triumphs move us to tears of joy or sorrow and remain in our memory throughout our lives. In contrast, most of us do not experience a similar intensity of feeling when we receive the very Body of God incarnate, even though this reality is infinitely greater than anything else in our lives. This is because in the Eucharist, God is both truly present and hidden. Hence St. Thomas Aquinas writes in his Summa Theologiae, “The presence of Christ’s true body and blood in this sacrament cannot be detected by sense, nor understanding, but by faith alone, which rests upon divine authority”.  The greatness of the Eucharist is known only to faith, not to the feelings or the senses or the sciences. It’s being (reality) is far greater than its seeming (appearances). God does not give us heavenly feelings when we receive the Eucharist for the same reason that he does not give us, heavenly sights. We neither feel nor see Christ as he really is so that faith, not feelings or seeing, can be exercised, trained, and emerge triumphant. 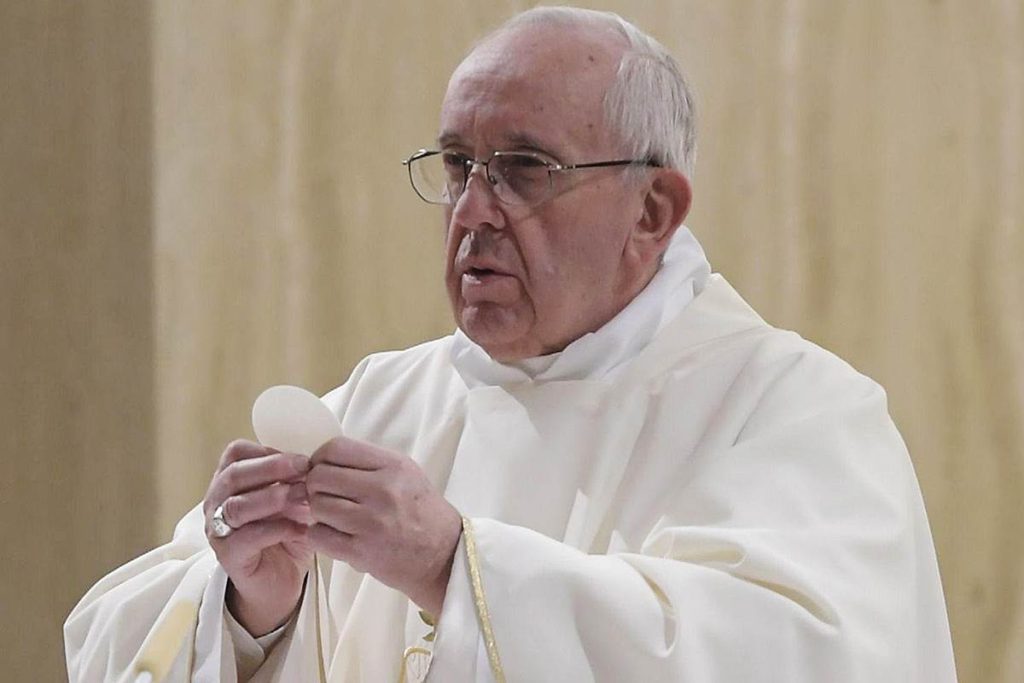 The ceremonial aspect of the the Holy Eucharist  as we have it today traces its origin from the Jewish berakah. For the Jews and the Judo-Christians, berakah, ‘blessing / thanksgiving,’ was an act of praise directed to God as the basic expression of all prayers. The early community obeyed Jesus’ command to ‘break bread’ in his name (Acts 2:42). Gradually they saw the need to separate the rite from a meal and give a more prayerful setting for this act of worship. The Eucharist here was already seen as anamnesis or remembrance, that is, ‘the bridge between the climax of the first coming and the dawn of his final coming’. In the first century Christian treatise Didache, we read that the Eucharist was moved to Sunday in memory of Christ’s resurrection. As the number of the believers increased, the celebration of the Eucharist was no longer possible in the Domus Ecclesiae or the house churches and local Churches were built for the same. 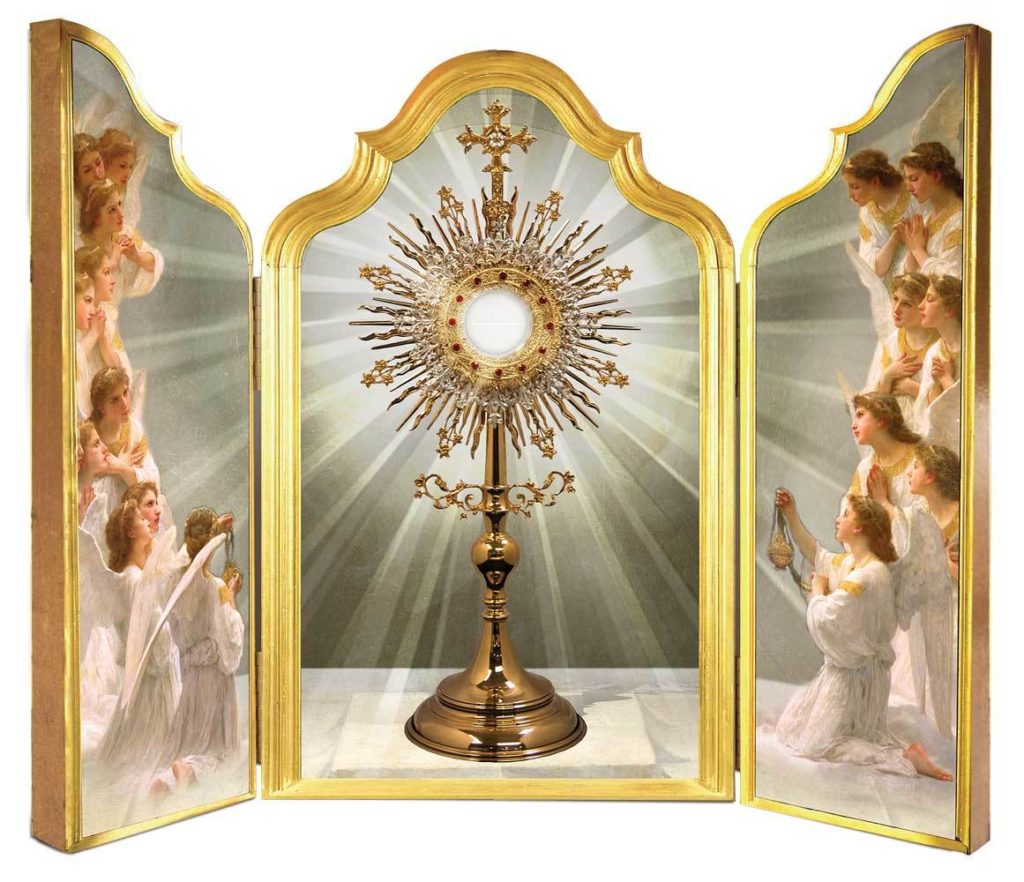 Today we are living through a challenging time. The pandemic and the restrictions it brought has limited our religious interactions to the internet and the Eucharist to the Domus. While being accustomed to the online Eucharistic celebrations and virtual sacraments, a disturbing question lingers in the thoughts of at least a few believers, “Why do I need to go back to the church for the Eucharist? Why can’t I just continue watching Holy Mass online ?” The Gospels reveal that Jesus’ disciples always lived their relationship with the Lord as a community, hence an authentic spirituality, which is ultimately an intimate, personal relationship with the Lord is not possible just by oneself, completely detached from the community of the believers. The early Christian community gathered together at the table as a sign of their communion. It is true that the difficulty in coming together as a community to pray and celebrate the Eucharist has resulted in the offering of Masses, prayers and faith based initiatives online, and the faithful have been encouraged to make an act of Spiritual communion given their lack of access to the Holy Communion. Though the Lord is allowing this through the ecclesiastical authorities due to the difficult situation, this is not the Church. The media may be able to foster communion, but still the faithful are not ‘together’. The digital community is totally different from the real community. 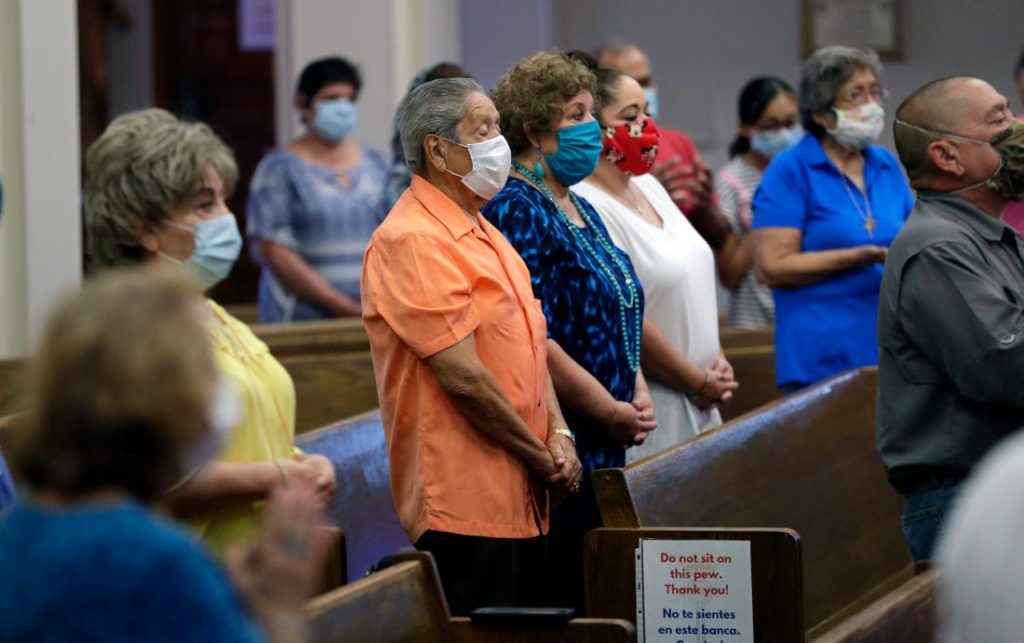 At this juncture, it would be apt to recollect an experience shared by Pope Francis. There were discussions going on about celebrating the 2020 Easter Mass in an empty St. Peter’s and to be broadcast live globally. When a bishop whom Pope addresses as ‘good’ heard about it, he scolded the Pope telling, “Be careful not to virtualize the Church, not to virtualize the Sacraments, not to virtualize the People of God.” The Church, the Sacraments and the People of God are concrete, not just a virtual reality. The faithful’s relationship with God must also stay concrete, as the apostles lived it , as a community  and with the people of God, not lived in a selfish way as individuals or lived in a viral way that is spread only online. The forced isolation devised to stop the pandemic is presenting the danger of people living the faith only for themselves – detached from the Sacraments, the Church and the people of God. These days could become a wonderful occasion to rediscover the family as the domestic Church, a real place where we meet Jesus. But if the Domus is cut off from the Ecclesia, it becomes just an ordinary house, detached from the people of God. Pope Francis emphasises, “The ideal of the Church is to be always with the people, with the Sacraments. Always.”  Just as the Church remains with the people of God, the People of God must also remain with the Church. 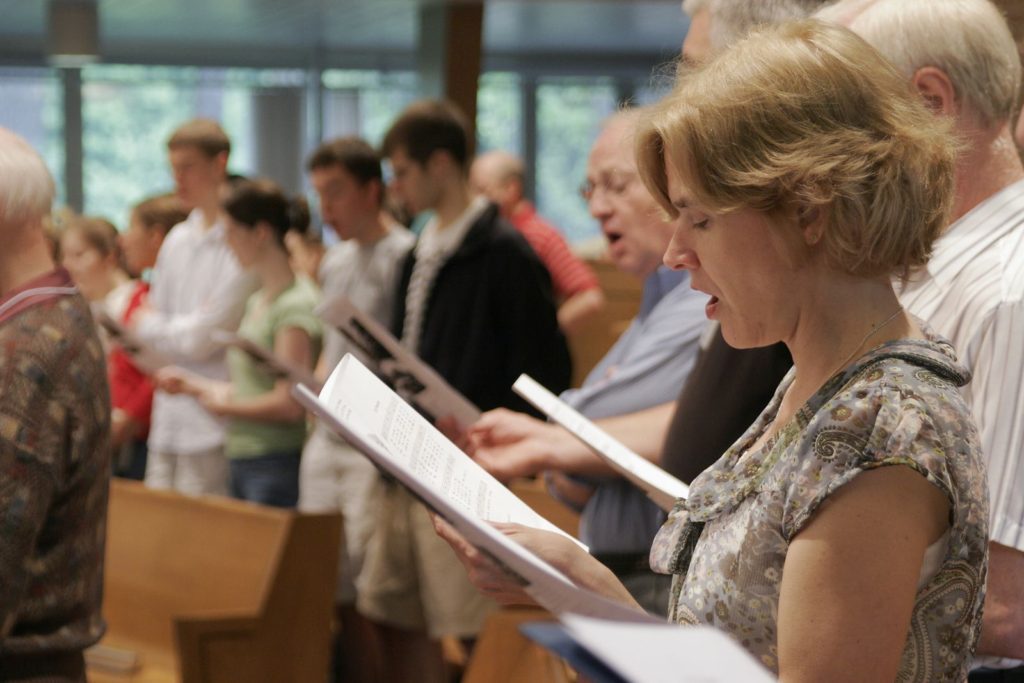 Saint Irenaeus states: “Those who do not share in the Spirit do not draw from the bosom of their mother (the Church) the food of life; they receive nothing from the purest fountain that flows from the body of Christ”. May these days of isolation and loneliness bring us more close to the Mother Church and to the Eucharistic Lord. Let us not forget that the Lord left behind a pledge of hope and strength for life’s journey in this sacrament of faith where natural elements refined by man are gloriously changed into His Body and Blood, providing a meal of fraternal solidarity and a foretaste of the heavenly banquet. Let us remember the words of Saint John Paul II, who said, “The Church and the world have a great need of Eucharistic worship. Jesus waits for us in this sacrament of love. Let us be generous with our time in going to meet Him in adoration and in contemplation that is full of faith. Let us be ready to make reparation for the great faults and crimes of the world by our adoration that never ceases.” “Thanks be to God for His indescribable gift.” (2 Cor 9:15)